It may take one or more hostile and unsettling interactions or several debriefings with other colleagues before you realise the parent is behaving irrationally, and that you need to develop an effective, planned approach to manage future interactions.

These parents tend to present to the school in a heightened emotional state. They are often already worked up over an issue or, ‘primed’ to go on the attack in response to certain triggers. Typically, they blame or verbally abuse school staff with statements based on half-truths, misinformation or pieces of information that are used out of context.

Sometimes there is a historical reason for parent hostility, such as a belief that a child’s previous teacher was slow to act or did not appropriately address the learning or safety needs of their child. At times their confrontations with school staff will involve unpredictable and bewildering behaviour. This may occur despite efforts by school staff to remedy the child’s needs and apologise to the parent.

Three different circumstances may underpin the irrational behaviour of a parent. 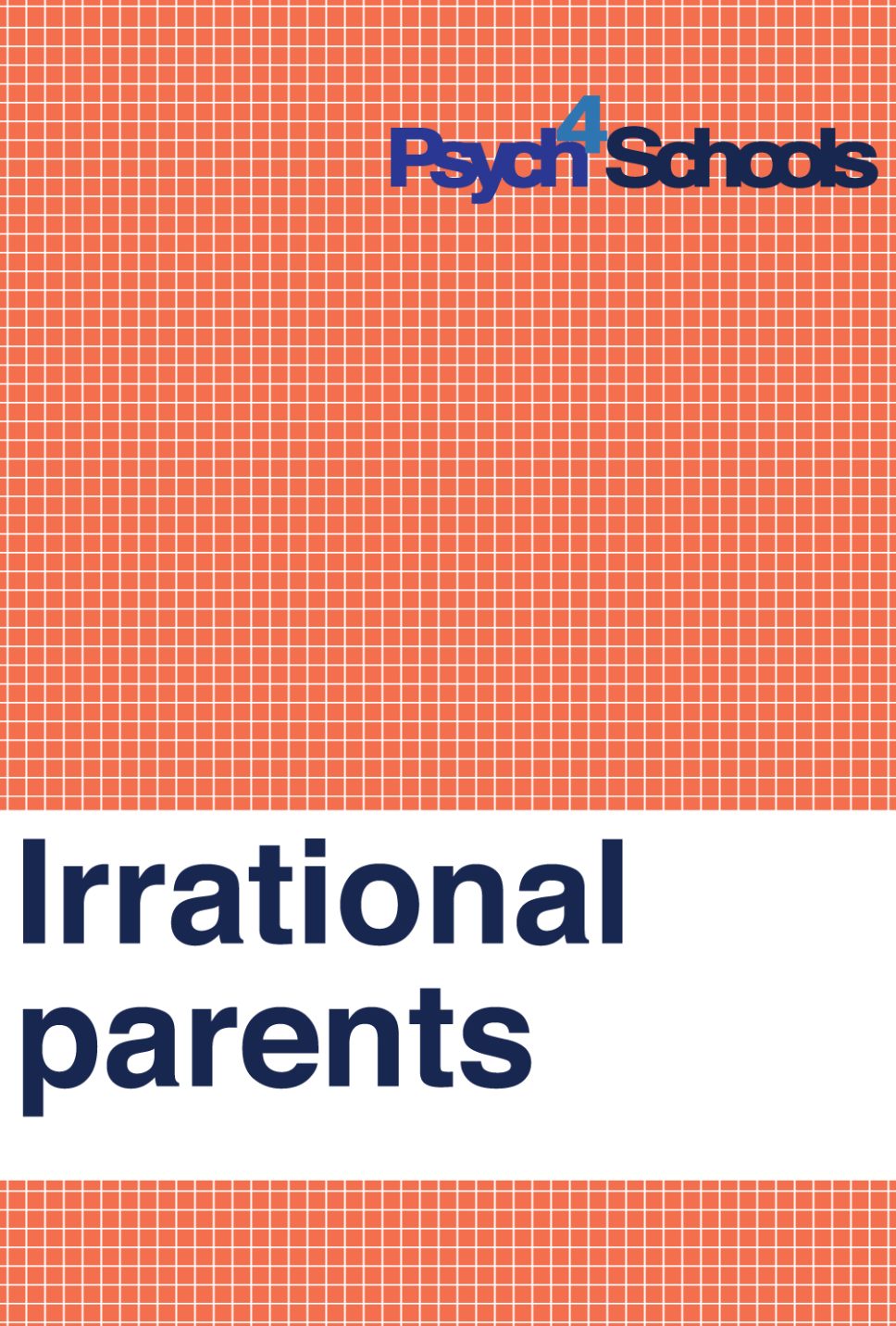 It is very difficult to find common ground with these parents; so, unless carefully planned, meetings can be time-consuming and unproductive.

Highly irrational reactions indicate hyper-arousal; that is, the sympathetic nervous system has been activated, as it would be in live combat. In other words, this is the fight aspect of the ‘fight, flight or freeze’ response. The person who is behaving irrationally needs to calm down before they can process information. Indicating that you hear what the irrational parent is saying may help to calm them to some degree. When the person is calm, there is some hope that they will listen to your point of view and respond reasonably.

As a teacher or principal you are generally not in the best position to directly change or challenge the thinking of a parent who is behaving irrationally, but you may be able to help them to become calmer and more rational in regard to assisting and supporting their child at school.

Should I be meeting this parent?

While classroom teachers will successfully conduct a variety of meetings with parents, some meetings should not be attempted on your own. There are a number of meetings where colleagues, the principal or other consultants such as the school psychologist should be present. See the Psych4Schools document, ‘When support is needed at a meeting’ before embarking on meetings that may not be suitable to conduct without support or thorough preparation and planning. More experienced staff such as principals, heads of school, student welfare coordinators and psychologists may best conduct some meetings.

When to seek additional help outside the school

In a small number of cases, parents who are behaving irrationally will continue to talk around and around in circles in a bewildering way or refuse to commit themselves, despite their participation in what seems to be an emerging or clear plan or set of ‘agreed’ goals. They may indicate that they don’t wish to respect or abide by usual school, education department or other education authorities’ procedures or protocols. They may make unreasonable and unworkable demands, for example demanding that certain staff or teachers are not to speak to their child at school.

In a small number of cases, principals may need to outline very clear parameters that indicate how the school is prepared to support the child and the ways in which the parent can interact and communicate with the school. It is important to always emphasise that the school is acting in the best interests of the child along with the wellbeing of the school community. The parameters that might be set by the principal may state for instance, when a parent may or may not enter a classroom or the school, and require all meetings to be by appointment.

In extreme cases principals can consult with the district, regional or central office or other governing authority for further advice on addressing parents’ concerns and complaints effectively. In addition, consult policy and guidelines that your education department or governing authority may provide, such as the guidance provided by the Victorian Department of Education and Early Childhood Development, ‘Addressing parent concerns and complaints effectively: policy and guides’,http://www.education.vic.gov.au/about/contact/pcschoolinformation.htm or in South Australia the resource pack for managing complaints and challenging situationshttp://www.decs.sa.gov.au/docs/documents/1/RespondingtoConcerns.pdf

Caution regarding a genuine concern by a parent

All valid parent concerns should be addressed. Such concerns include, but are not limited to, a child’s medical condition, safety, other wellbeing issues, learning difficulties, disorders, family stress or major loss, or parental diagnosis of anxiety or a medical condition.

It is reasonable for parents to expect that perceived learning difficulties and social competency issues such as bullying and other genuine concerns about the child’s safety are investigated and followed up by the school. Schools that have clear discipline and student management, welfare, additional or special education provision, focused and appropriate learning expectations, and parenting resources are usually well placed to assist.