For children with ADHD the pattern of inattentive, impulsive and hyperactive behaviours is far more prevalent than in other children of the same age. These behaviours have a significant biological basis and the symptoms of ADHD are persistently evident at home, school and across all other areas of these children’s lives. ADHD is often associated with negative long-term outcomes including poor mental health and impaired social, academic, and occupational functioning.

ADHD is not a developmental phase or the result of poor parenting. There is overwhelming evidence that the brains of children with ADHD, particularly in the frontal lobe region, are ‘wired’ differently from their non-ADHD peers. These children have problems with executive functioning—that is, their ability to evaluate a situation, plan and take the required action, and adjust these actions as needed, is often impaired. ADHD also affects the ability to focus and maintain attention. As a result, ADHD can significantly impede learning, as well as social and general functioning. Academic performance, peer relationships, self-esteem, mood and personal organisation may also be compromised.

ADHD can co-exist with other mental health disorders. Some children with ADHD also have a diagnosis of one or more of the following:

It is critical that these children are assisted at home, at school and in other community settings to form a positive self-concept and a belief that they have abilities that are valued. It is also essential for them to learn that their behaviours can be managed through self-regulation and assistance from others. 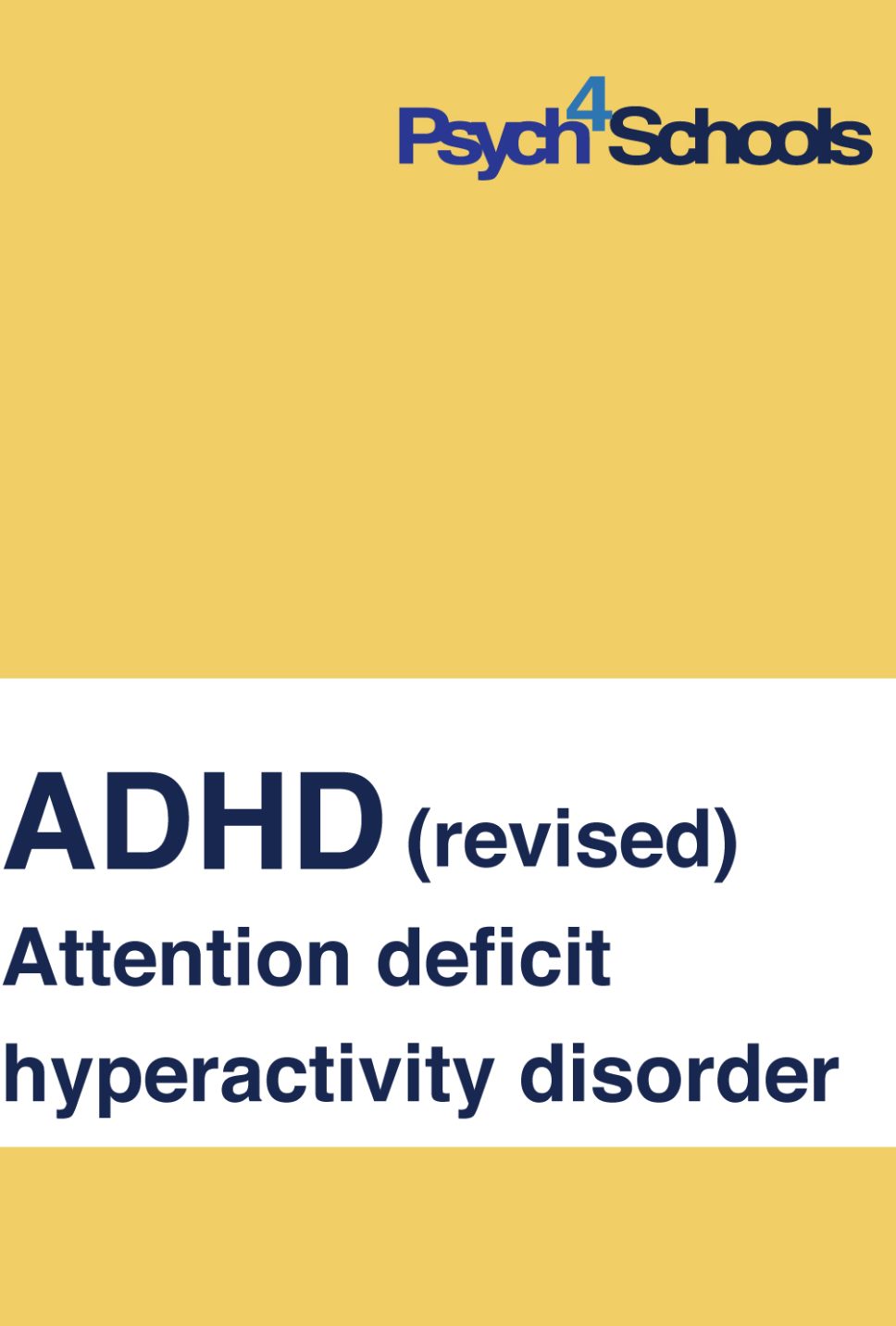 People often incorrectly perceive these children to be deliberately defiant, rude or lazy. The way they are perceived and treated, and their own judgments about their abilities, can give rise to additional symptoms and challenging behaviours in the classroom and at home. These can include:

A diagnosis of ADHD is currently twice as common in boys than in girls. However, it may be that females have been under-diagnosed.

ADHD in girls can be especially problematic for peer and social relationships, particularly with other girls. Teachers and parents report that girls display more verbally impulsive behaviours such as making inappropriate comments, frequently interrupting conversations or not listening carefully, and sending and posting electronic texts and messages impulsively.

How is ADHD diagnosed?

A paediatrician, neurologist or child psychiatrist typically diagnoses ADHD. Psychologists are also commonly involved in diagnosis and treatment. Diagnosis is made using a range of observations, surveys and clinical interviews with parents, teachers and the child. Symptoms must have been present prior to the child turning seven and have persisted over a six-month period. Symptoms must also be present in more than one setting, for example, school and home.

Is ADD the same as ADHD?

Some children are diagnosed with attention deficit disorder (ADD). Children with ADD are less hyperactive than those with ADHD but are just as inattentive. Children with a diagnosis of ADD are less likely to display challenging behaviours or social difficulties but will have difficulty maintaining attention. They are often identified as daydreamers. These children’s behavioural problems are more likely to be overlooked by their parents and teachers.

Behavioural sleep problems affect up to 70% of children with ADHD. Sleep problems exacerbate the daily functioning difficulties of children with the diagnosis. There is evidence that when children’s sleep habits and patterns are managed (for example, by effective bedtime routines or using relaxation techniques) along with standard clinical care, daily functioning improves.[3] Congress paper, Mulraney, M., The Sleeping Sound with ADHD Study, APS National Congress, 2016. Murdoch Children’s Research Institute

Up to 40% of children with ADHD may also have Oppositional Defiant Disorder (ODD). This disorder is characterised by negativity, hostility, and defiance. This childhood disorder is typically diagnosed by a paediatrician, psychiatrist or psychologist. [5]Raisingchildren.net.au The Australian Parenting website, Oppositional defiant disorder (ODD): children 5 -12 years. … Continue reading A behaviour support plan should be devised to help manage challenging behaviour and to promote self-application to tasks. In addition, implement strategies to build social skills and encourage pro-social activities to help promote peer acceptance and reduce any aggression.

Concentration difficulties, organisational problems, impulsive behaviour, anxiety and forgetfulness can all affect the way a child learns at school. It is important that a comprehensive educational assessment is undertaken and learning abilities are fully assessed to enable appropriate strategies to be put in place to support learning.

ADHD and effort as punishment

Children with ADHD are often more sensitive than other children to the cumulative effects of punishment and failure [6] Evidence for increased behavioral control by punishment in children with attention-deficit hyperactivity disorder E. Furukawa, B., Alsop, P., … Continue reading than typically developing children. They are also less likely to be given a second chance by teachers. Some children with ADHD view others as hostile and perceive life as unfair as a result of early non-success at school.

Teachers should be aware that if a child with ADHD is reluctant to begin a task, or gives up easily, the task may require more effort than the child feels they can manage. The more demanding a task, the more help will be needed for the child to persist. Simple but frequent rewards, such as smiles or words of encouragement, can help children with ADHD to stay on task. The same can be said for typically developing children, but children with ADHD, are more sensitive to repeated experiences of failure and are more likely to miss opportunities for success. Teaching these children to adopt a growth mindset can be highly beneficial (see Carol Dweck’s work on Growth Mindsets).

There is no cure for ADHD. Behaviours are commonly managed through tailored behaviour management programs for parents, teachers and the child, in combination with stimulant medication. The need for medication is assessed and monitored typically by a specialist such as a paediatrician, neurologist or child psychiatrist, in consultation with the child’s GP, parents, teachers, psychologist and other allied health professionals. There is also a non-stimulant medication available.

Up to 80 percent of children with ADHD will continue to display symptoms of this disorder throughout adolescence and into adulthood. However, with appropriate support and intervention during childhood, many people with a diagnosis of ADHD will learn to manage their symptoms into adulthood and develop successful careers. Equally, some children with ADHD, particularly those with a co-existing learning or mental health condition, may find it difficult to maintain employment without a high level of support from family members or community agencies.

Strategies to support the child with ADHD

Teachers can use a number of strategies to support the child with a diagnosis of ADHD.

Find more information on ADHD and the relevant resources by becoming a member and signing in to download.

Click here to read copyright details, a summary of the licence and terms and conditions to use and reproduce our digital materials granted to authorised users.