It is not unusual for children to sometimes tell lies or embellish the truth, particularly in the preschool and early primary years. However, lying is problematic if it occurs frequently, becomes a habit or is hurtful to the child or to others.

Typically, a child develops a sense of right and wrong by about nine or ten years of age.[1]Queensland Government, Department of Communities, Child Safety and Disability Services. https://www.communities.qld.gov.au/ If lying is a problem behaviour during the early to mid-primary years it may reflect cognitive and/or social immaturity.

A child who frequently tells lies is likely to lose the trust of their peers. This can lead to complex social problems. Lying can have an emotional impact on the child who lies, others who hear the lie, and those included in the lie. Lying can also lead to anxiety and poor self-concept.

Chronic lying may indicate an underlying issue that needs to be addressed, such as limited problem-solving or poor communication skills. It can also be a symptom of conditions such as Attention Deficient Hyperactivity Disorder (ADHD) and Oppositional Defiance Disorder (ODD). Some of these children have trouble in controlling aspects of their thinking or behaviour. Lying or perceived lying, due to miscommunication or misunderstanding, can be an associated problem.[2] Bernstein, J., ADHD and ‘Honest Lies’. (2010) Psychology Today, Posted February 21, 2010. ...continue Children who engage in frequent lying should, with parental consent, be referred to a psychologist. In older children, chronic lying can be associated with antisocial behaviour and delinquency.

Why do children lie?

It can be very useful to understand a child’s motivations for lying. Like adults, children lie for a variety of reasons, including the following:

Avoiding something undesirable or challenging

If children don’t want to deal with their emotions or confront a difficult situation, they may lie about their actions, skills, family, friends, possessions or their past. In some cases, telling lies can keep the child safe. Children may tell lies to avoid:

Sometimes, children lie to deceive a person who may wish to harm them or others. 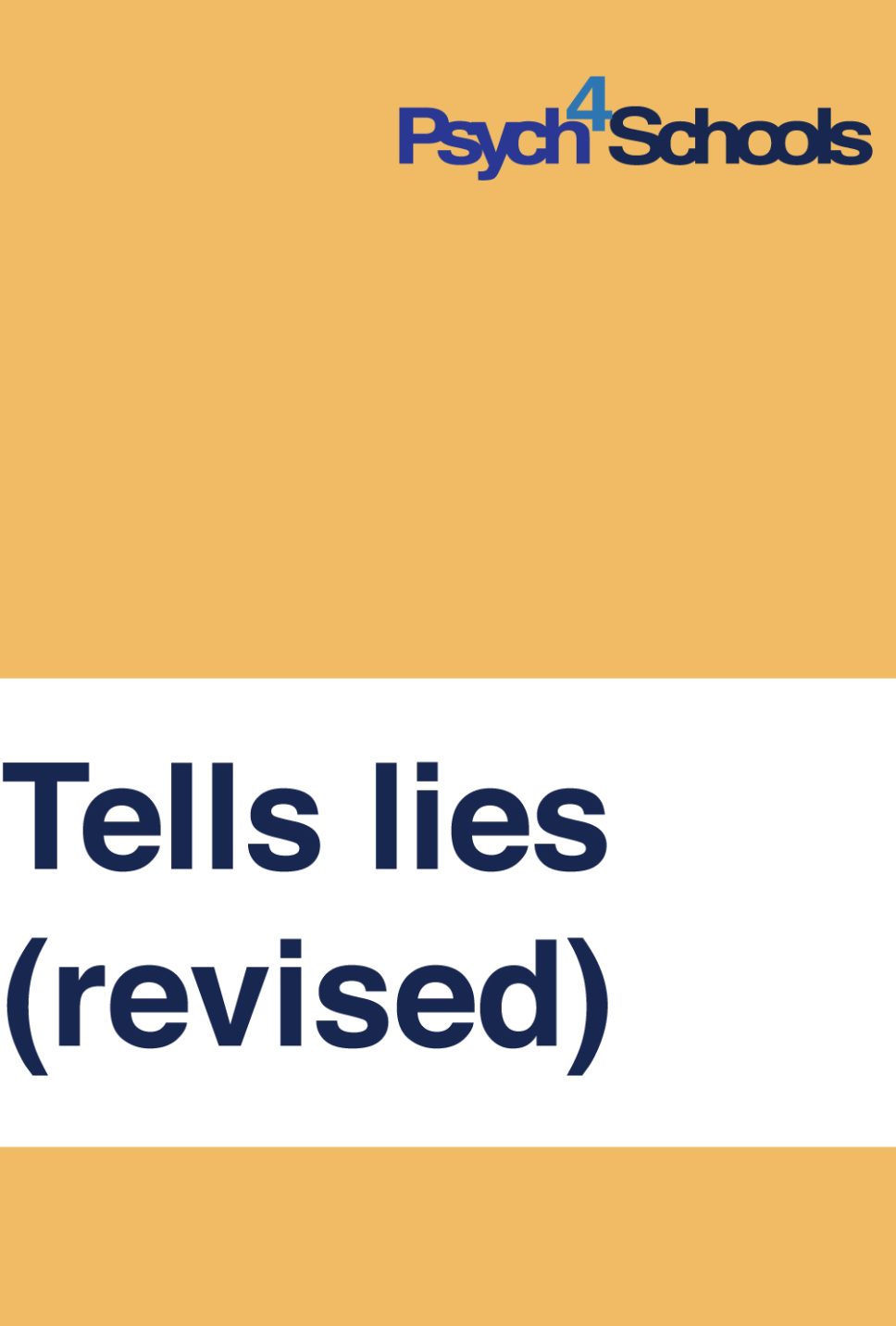 Some children may exaggerate the truth or make up stories to gain approval or respect. Such lies are often motivated by feelings of insecurity or ‘neediness’ and may be an attempt to:

Young children often lie about things they wish for or desire. This is sometimes referred to as magical thinking. For example, children with absent fathers may tell others they spent time with their dad on the weekend when they did not. Children may:

By about eight years of age most children have some understanding of the difference between reality and fantasy.

Lying may become a habit if it avoids something unpleasant, or gains something desirable. This is particularly so if the lies have gone unnoticed. Such lying is:

Avoiding hurting the feelings of others

Our society can encourage children and adults to avoid telling the ‘blunt’ truth in situations where someone’s feelings may be hurt. Some people believe a well-intentioned untruth or blatant white lie can be for the benefit of others, by protecting feelings or fostering friendly relationships.

Telling white lies can be viewed as a social skill for adults, especially when uttered in the interests of tact and politeness. However, the telling of white lies is generally deemed inappropriate at school. Most children gradually learn to tell the truth even if it is very uncomfortable to do so.

Learning about truth and honesty

Understanding that telling the truth is part of a valued moral code in our society is a cognitively sophisticated process and requires the encouragement, guidance and support of parents and teachers. All children experiment with telling lies or embellishing the truth.

Frequent lying that persists past the second year of primary school, can become habituated and it can become difficult for a child to tell the truth. When dealing with children who lie frequently, teachers need to attempt to understand the reasons, be consistent and patient, and accept that change will take time. The child needs to know the teacher cares about them and values their positive attributes.

Children are most likely to learn values such as honesty when:

Conflicting stories – who is telling the truth?

One of the most vexatious behaviour management situations for teachers relates to getting to the bottom of a conflict between children, where none of the protagonists will admit to being at fault and it appears that one or more of the children involved are not telling the truth. All parties claim they are innocent, not involved or that they didn’t do it. It can be difficult for the teacher to know who is telling the truth.

It is prudent not to label children. Young children often don’t have the cognitive and linguistic skills to tell the complete story, to explain both sides of a story or to accurately provide the details of how an event occurred. Their statements may not be lies but incomplete or inaccurate recounts or misunderstandings. Nevertheless, by about eight years of age, children have some understanding about the difference between truth and fantasy.[5] Queensland Government, Department of Communities, Child Safety and Disability Services. https://www.communities.qld.gov.au/

The following section outlines specific strategies teachers can use to encourage truth telling.

Strategies to support the child who tells lies

When talking to the child’s parents it is wise to use phrases and terms such as ‘still learning to tell the truth’, ‘not 100 per cent clear about what happened’, or ‘not being completely honest’, depending on the child’s age and the situation.