Skip to content
Home > Free Resources > Working with children > Dyscalculia (mathematics disability)
Children with dyscalculia have a poor sense of number. They experience significant difficulties understanding the size or quantity of a number and thus the relationship of numbers to one another[1] American Psychiatric Association. (2013). Diagnostic and statistical manual of mental disorders (5th ed.). Arlington, VA: American Psychiatric … Continue reading . Approximately 3 to 6 per cent of children suffer from dyscalculia[ref] utterworth, B. (2010). “Foundational numerical capacities and the origins of dyscalculia”. Trends in Cognitive Sciences, 14(12), 534–541.DOI:10.1016/j.tics.2010.09.007. PMID 20971676. [/ref]. With between 5 to 8 per cent of school-age children having significant problems with mathematics [2] Garnett, K. (1998). “Math learning disabilities.” Learning Disabilities Journal. L.D Online. Retrieved February 11, 2008, … Continue reading, it is apparent that dyscalculia is a major component of these difficulties.

The term ‘dyscalculia’ is used interchangeably with ‘mathematics disability’ and the DSM-5 (Diagnostic and Statistical Manual of Mental Disorders, Fifth Edition) clinical classification, ‘Specific learning disorder with impairment in mathematics’. Children with dyscalculia lack an intuitive grasp for number; as a result they have significant difficulties mastering number sense, number facts, calculation and mathematical reasoning.

Although maths difficulties are as common as reading difficulties they often go undetected or undiagnosed by teachers and psychologists. This may be because dyscalculia is still a relatively unknown disorder, however research and awareness is now growing.

Alternatively children may go undetected due to some adults believing that the child with maths difficulties just doesn’t have the aptitude or is not sufficiently ‘brainy’ [3] Williams, A, (2013). “A teacher’s perspective of dyscalculia: Who counts? An interdisciplinary overview.” Australian Journal of Learning … Continue reading for mathematics.

Deficits associated with dyscalculia can significantly limit secondary and tertiary studies and employment opportunities, and impact on a person’s everyday living and independence affecting financially literacy, including ability to shop and budget. 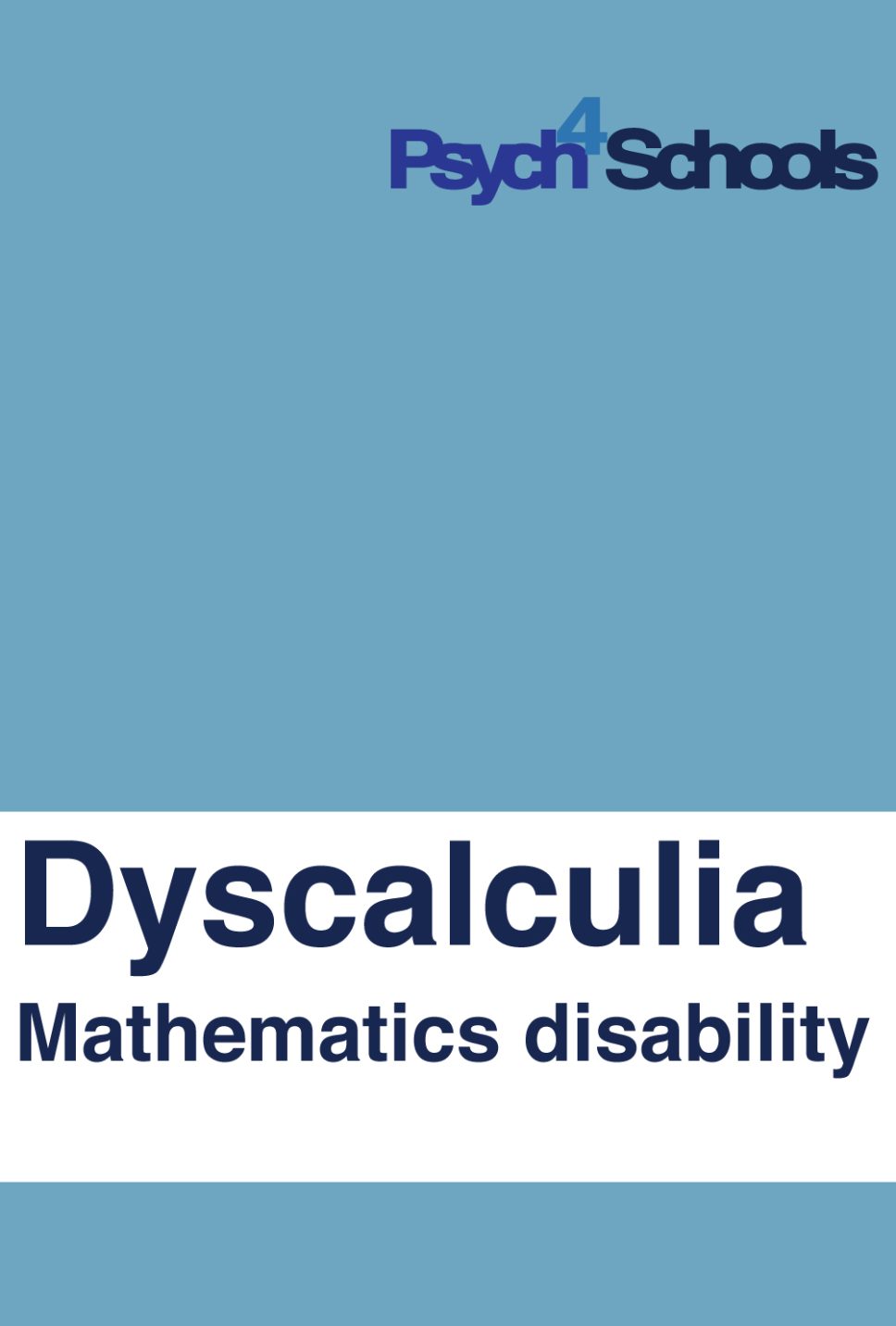 Characteristics of children with dyscalculia

Children with dyscalculia have significant difficulties in understanding the quantity or magnitude of numbers. Their poor ‘number sense’ leads them to have significant difficulties in the following [5] Butterworth, B. (2002 & 2005). Dyslexia and dyscalculia: a review and programme of research. . University College London: Institute of … Continue reading.

Children with dyscalculia display significant mathematical delays when compared with peers or to benchmarks or standards. They generally have a dislike of, and anxiety about, maths and difficulties with the following:

The following problems are often associated with dyscalculia:

Dyscalculia occurs in children across the whole IQ range, including children who are highly gifted, of average intelligence, or those diagnosed with an intellectual disability.

The cause of dyscalculia is largely unknown but it is believed to be associated with neurological differences in the brain, specifically the right parietal lobes[9]. It is more prevalent in children who have other learning difficulties or disorders such as dyslexia, ADHD, language disorders, Fragile X Syndrome, and epilepsy[10]. It is thought to be genetic, inherited from one or both parents[11].

It is important to note that dyscalculia is not caused by ineffective teaching, gaps in learning, poor parenting, a general dislike for ‘harder’ academic tasks, or the child not trying hard enough.

Testing for dyscalculia at school

A child is typically 9 or 10 years of age before significant maths difficulties are detected. By then they are often three to four years behind their peers in mathematics. To counter late detection, some UK schools screen all students for dyscalculia[12].

Once a child is 6 years of age, they can be screened using a commercial screening tool such as Professor Brian Butterworth’s Dyscalculia screener. This screening assesses how quickly and accurately children can enumerate (recognise by sight) sets of numbers, for example quickly establishing how many dots are on a screen, and comparing two numbers (such as recognising quickly that 7 is bigger than 5). Some other available tools assess a child’s ability to complete timed arithmetic tasks.

Psych4Schools has produced a trial Year 2 Mathematics Screen for transition screening from Year 2 to Year 3 to help identify students aged 7–8 years ‘at risk’ of mathematics difficulties.

How is dyscalculia formally diagnosed?

In order to diagnose children with dyscalculia a psychologist with experience in learning difficulties will administer standardised tests of intelligence, achievement and clinical assessments. The outcomes of these assessments will be examined in relation to children’s same-aged peers.

Unfortunately, current definitions of dyscalculia can make it difficult to formally diagnose very young children, since diagnosis is based on impairment in mathematical skills that are substantially and quantifiably below expectations, given the child’s chronological age, measured intelligence, and age-appropriate education. Formal diagnosis can often be delayed until Year 3 or much later since there is a lack of guidance in regard to what constitutes ‘substantially and quantifiably below expectations.’ Some psychologists think this means two years or more below expectations, whereas others believe four or more years below constitutes this criterion.

In addition, dyscalculia cannot be diagnosed, according to the DSM-5 (Diagnostic and Statistical Manual of Mental Disorders, Fifth Edition), unless other causes have been discounted, such as intellectual disabilities, uncorrected sensory acuity, other mental or neurological disorders, psychosocial adversity, language learning difficulties, or inadequate teacher instruction.

Without proper diagnosis, monitoring, and regular targeted intervention, children with dyscalculia will not improve and difficulties with mathematics will persist throughout schooling and into adulthood.

Strategies to support the child with dyscalculia